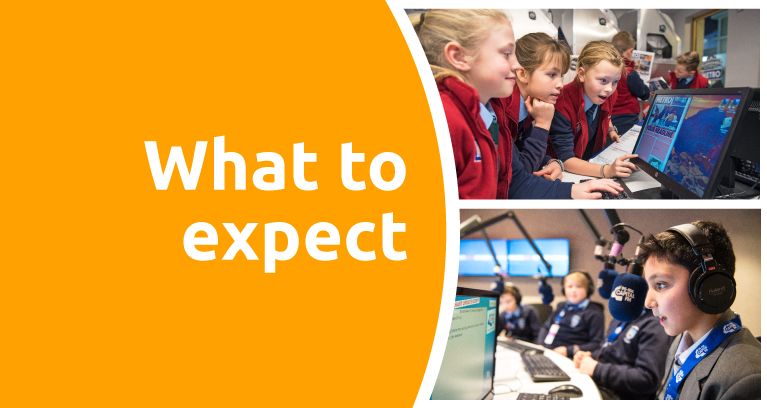 KidZania London is situated on the first floor of Westfield London, Shepherd’s Bush between Marks and Spencer and GAP.

Route 148 will run to the Bus Station via Wood Lane.

If your party intends to travel by coach, Westfield London has two coach drop off and pick up bays. There is no booking required for these, however, coaches must not park in these bays once they have dropped off or picked up.

The Coach Drop off bay is situated on Ariel Way, which runs alongside Westfield London. Once ready, simply follow the footprints to the lifts which will bring you out next to KidZania’s main entrance.

When you arrive at KidZania, you and your group will be directed to our airport for check in. Every group is given a dedicated ‘lunch luggage’ check in area, so you can drop your bags and lunches off. Our team will then bring them to you at lunchtime.

All groups will then be checked into the KidZania city by being given their security bracelets (adults too!). These RFID bracelets ensure that all children are safe throughout their visit, and no members of the group can leave without being altogether. Whilst in the city, adults can use our touch screen check in stations to see which activity their pupils were checked into.

Kids will also be given 50 kidZos (KidZania currency) each as their starting salary. With this money, children can choose if they want to work, earn or spend their money.

If you want to use the time to catch up on work, there are plenty of areas which are in the centre of the action, allowing you the opportunity to still be visible to the children whilst you do so. Of course, our food and beverage areas provide hot drinks and snacks while you are waiting.

And if you just want to escape for a while, you can head to our Grown-Ups Garden Shed. Situated on the upper level, the space is perfect to read a book, utilise our computers or just relax.

“KidZania is a kid’s dream made real. Every child wants to be a grown up (goodness knows why!) and KidZania allows them to explore that dream in a fun, safe and educational way.”

Browsing on a mobile device? Please switch to a desktop or a laptop computer to purchase our Annual Pass. Our mobile site currently does not support this functionality and we are working to improve this.